On Friday May 21st, 2010, the USFWS, Columbia River Fisheries Program Office (CRFPO) participated in a "bike commuter challenge" as part of National Bike to Work Day. The competitors in this friendly challenge included two of our neighboring offices: WACOM, a software development company, and US Geological Survey, Cascades Volcano Observatory. The goal of the challenge was to see how many people from each office would ride their bikes to work on Friday.

The CRFPO quickly organized: bikes were tuned up, routes were planned, and equipment needs such as bike pumps and extra tire tubes were discussed. Those participating in the challenge decided to meet at various points along the route and ride to the office together.

The weather leading up to Friday's big commute was promising- partly cloudy, low 60's, and just a few mild rain showers in the afternoon. Friday morning, however, was a different story. Rain, temps in the upper 40's and a blustery wind. I was pretty sure those who had committed to doing the ride earlier in the week would change their minds once they saw the forecast . I mean even a seasoned commuter would scoff at such conditions! 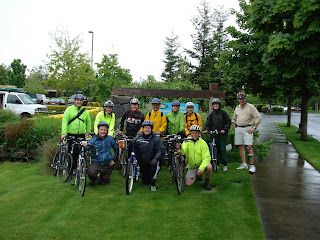 To quote one of our competitors from WACOM "I caught up with 9 of FWS's riders this morning on my way in, and I was impressed that they had all ridden across the 205 bridge together. Not only that, but they wanted to make the group ride a monthly event!"

The following week we had a community, lunchtime potluck with our competitors, and we collectively celebrated everyone's participation in the challenge. The potluck also provided a forum for discussing how we can reduce our carbon footprint in an office environment.

To learn more about the Federal Green Challenge and how you can help reduce carbon emissions check out the following link:
http://www.epa.gov/climatechange/wycd/road.html
Posted by maureen kavanagh at 2:27 PM No comments: 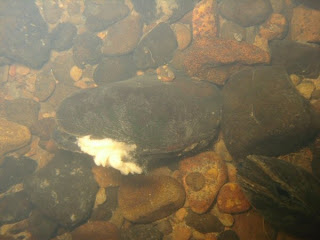 Western Pearlshell mussel releasing conglutinates.
OK, in February I wrote a bit about the reproductive cycle of freshwater mussels. Well, last week I witnessed part of the cycle. It was very exciting. Apparently Western pearlshell mussels release conglutinates, a mucousy white mass filled with glochidia (mussel larvae). The conglutinates break up in the water current and settle to the bottom of the stream, where they resemble little white worms. That's the easy part of the life cycle. Soon after being released, a suitable host fish needs to eat 'the worm'. After being ingested, the glochidia attach to the gills of the fish and begin their transformation into free living mussels. That is, if all goes well! 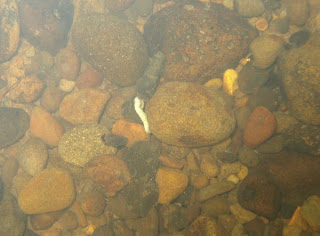 Wormlike mass of glochidia.
Posted by Donna Allard at 9:04 AM 1 comment: 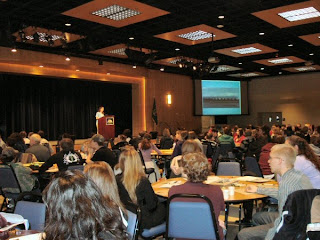 Last month, the 3rd annual Student Environmental Leadership Forum (SELF) was held at Clark College. SELF is a conference for students in the Clark county area who wish to make positive change. The conference provides environmental education as well as leadership tools so that students may become active, aware, and effective community members. This year, over 150 students, representing fifteen schools attended the event. Environmental topics included climate change, waste reduction, clean water, and local food systems. Topics for the leadership sessions included volunteerism, building a clean energy future, a student-run campaign to stop people from idling car engines outside of schools, and turning great environmental ideas into great businesses. After the conference, student attendees were able to apply for a small grant from Clark County to implement their own ‘action project’. Past action projects have included construction of a compost system, creating a model hydrogen fuel cell vehicle, planting a native garden, and manufacturing of biodiesel. 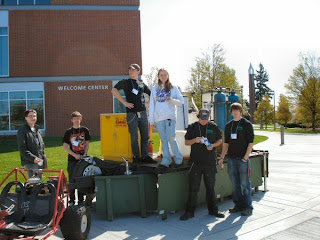 Heritage High School Biodiesel Club
Posted by Donna Allard at 7:43 AM No comments: