Yesterday, I went for a walk in the park. That’s right, Tryon Creek State Park. Jen and I were conducting the biweekly spawning ground survey in Tryon Creek. For those of you who are unfamiliar with the creek, it is a relatively undisturbed urban watershed. Most of it lies within the boundaries of the state park in southwest Portland. Historically, the creek probably supported abundant populations of anadromous fish. Now it seems that most of those fish populations may be depressed. One of the reasons for this may be a culvert running under Highway 43 which was constructed in the late 1920s. The design most likely blocked lamprey migration and was not ideal for salmonid passage, either. The baffles within the 400 foot long culvert were not fish friendly and the drop at the outlet of the culvert was too high for fish to negotiate at times. 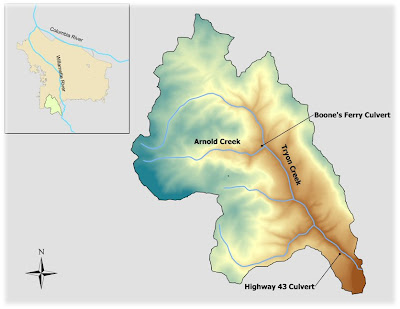 Back in 2003, the City of Lake Oswego secured a Metro Greenspaces grant to analyze the best alternative for replacement or removal of the culvert under Highway 43. Soon the Oregon Department of Transportation came up with some more money. Lots of other partners became involved as well.

Culvert Baffles - Before and After 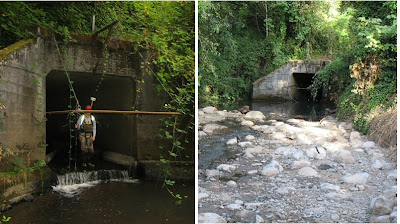 Fish Passage into Culvert - Before and After
In 2009, no lampreys were found in any section of Tryon Creek. The same species of salmonids were found both above and below the culvert. Cutthroat trout spawning activity was observed above the Highway 43 culvert as well. Still, it is too early to determine the effectiveness of the restoration work.

We will continue to sample Tryon Creek to further our understanding of all fish species within the system. Monitoring will provide further evidence for the level of success of the improvements made to the culvert and to the creek below the culvert as well as the efficiency of passage through the culvert by lampreys and salmonid species.

The Oregon Chub - A Little Fish on the Road to Recovery

The Oregon chub is a small minnow found only in the Willamette River basin in western Oregon. Adults are typically less than 3.5 inches in length. They live in habitats such as beaver ponds, side channels, and flooded marshes, with little or no water flow, silty bottoms, and aquatic vegetation for cover for hiding and spawning. Historically the Willamette River had many side channels, oxbows, and overflow ponds that provided ample habitat for the chub. Periodic flooding of the Willamette also created new habitat and transported the chub into these areas to create new, or help sustain existing populations.

There are many reasons for the severe decline of Oregon chub populations. Construction of dams and flood control projects changed the Willamette River significantly, preventing the formation of new habitats and the natural dispersal of the species. Other factors responsible for the chub’s decline include: habitat alteration such as channelization and bank hardening, the introduction of non-native fish and amphibians, herbicide and pesticide runoff from farms and roadways, and diversions. 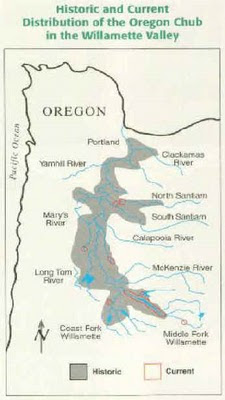 The Oregon chub was first listed as endangered in 1993. In 1998, the U.S. Fish and Wildlife Service published a recovery plan for the chub. The goal of the plan was to reverse the decline of the Oregon chub by protecting existing wild populations, re-introducing chub into suitable habitat throughout its historical range, and increasing public awareness and involvement. The criteria set forth in the plan for downlisting the species to “threatened” was to establish and manage 10 population of at least 500 adult fish. All of these populations had to exhibit a stable or increasing trend for 5 years as well.

Along with the efforts of other agencies, active programs have been put in place to protect Oregon chub habitat. Critical habitat was designated in March of this year. The species’ status has improved recently. On April 23, 2010, the U.S. Fish and Wildlife Service changed the Endangered Species Act classification of the Oregon chub from endangered to threatened.

To learn more about the Endangered Species Act, visit http://www.fws.gov/laws/lawsdigest/esact.html