Fish ladders - most people in the Northwest that even know a little bit about salmon know that many dams have fish ladders - allowing adult fish returning upriver to navigate up and over the hydropower dams along the Columbia River. These ladders have been specifically designed to help salmon migrate with highest success and survival, in the shortest amount of time. What they have not been designed for is Pacific lamprey passage. 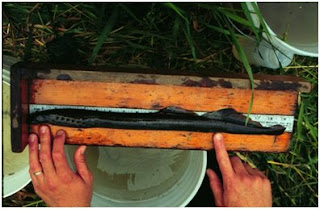 This winter staff from the CRFPO including myself, Dave Wills, Christina Luzier, Greg Silver, and Howard Schaller all participated in a tour of all of the ladders on the hydrosystem. Some of us only visited a few while Dave Wills was a die-hard and visited every single ladder – most of them in the span of just a few weeks. Many of the ladders had been drained of water, an annual event that allows dam personnel to do routine maintenance. We were able to walk through them and get a fish’s perspective. We were guided by project biologists, engineers, and other fishery researchers, and learned how water is delivered through the different ladders. We learned about things like diffusers and hydraulic head pressure. We learned about known and perceived problem areas for adult Pacific lamprey passage.

Let’s back up. Pacific lampreys, like salmon, lay their eggs in fresh water. The young rear for several years in the fresh water and then migrate to the ocean. After one to three years in the ocean they mature and return to spawn in a freshwater river. Lampreys, however, do have some striking differences from salmon that make it harder for them to navigate the ladders. Pacific lamprey, Entosphenus tridentatus, is an ancient fish species that has a cartilage skeleton instead of bones. They may reach lengths of about 30 inches and weigh about one pound. They don’t swim as well as salmon and only a low percentage of fish make it past each dam. A previous study estimated that perhaps only 50% of lampreys that encounter a dam successfully pass it. This becomes a problem when you consider the 8 potential dams that lamprey will encounter during their migration from the Pacific Ocean to the Snake River and beyond. For example, only 15 adult lampreys were counted at Lower Granite Dam (the highest dam on the Snake River system with fish passage) in 2010 – only 2 were counted passing Wells Dam on the Upper Columbia! They don’t have the strong muscles that salmon do and rely on an undulatory swimming motion (sort of like a snake) which just isn’t as efficient. So when it comes to pure water velocity they can’t make it through very fast water without needing a break. Resting and attachment areas (you may have seen lamprey attached to the glass at the dam viewing windows) are needed to keep from getting swept back downstream. So things like roughened bottom surfaces may help break the current and also provide protected places for them to rest. Rounded corners are much better than 90ocorners. Lampreys have a very difficult time in fast velocities negotiating over or around a sharp 90° corner. Diffuser grates with smaller openings prevent lamprey from squeezing through and getting lost in dead-end portions of the dam.

A big challenge to ladder improvements is that changes cannot be made that impede salmon passage. Many of the wild stocks of salmon in the Columbia River Basin are threatened or endangered and are thereby protected by the Endangered Species Act. We walked through these ladders with an eye toward improvements that may be made to help lamprey pass. For example, a simple fix being installed at the Washington shore ladder at Bonneville Dam was a piece of sheet metal to create a sort of ramp over a small concrete ledge.

The goal of the ladder tours is ultimately to work with the Corps of Engineers and develop a database of problem areas, ladder by ladder, and proposed fixes. Some fixes could be relatively cheap, others could have high costs. All of these factors will be input into a prioritization exercise and hopefully a systematic approach can be taken to start to address these fixes.

Beyond the Pacific lamprey’s intrinsic value as a unique aquatic species, these fish have been, and continue to be, an important fish, culturally and as a valued food source, for the native peoples in the Columbia and Snake River basins and a vital component of the aquatic ecosystem. 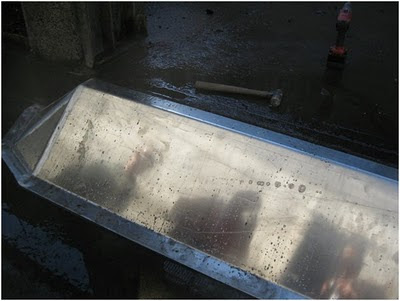 Newly installed sheet metal ramp to guide lamprey over a 90° concrete lip at the Washington shore ladder at Bonneville Dam. 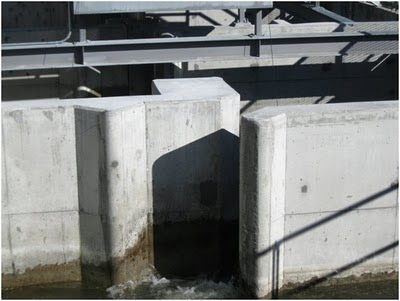 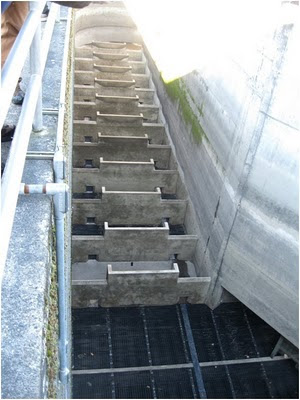 Junction pool corner and beginning of the weir portion of the Washington shore ladder at Bonneville. The junction pool with its diffusers, complex hydraulics, and density of sturgeon, is a known problematic area for lampreys. 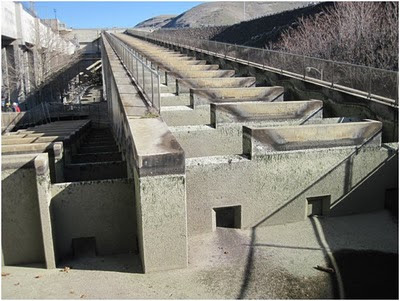 The de-watered John Day south ladder. Lampreys have a long climb, but orifice openings are chamfered, which is easier for lamprey to pass than through a square cornered opening.

Submitted by Jeff Jolley.
Posted by Columbia River Fisheries Program Office at 11:31 AM No comments:

In February, I had the opportunity to attend the 2011 ORAFS Annual Meeting in Bend, OR. The meeting included a wide variety of opportunities for sharing technical expertise, ideas, results of research, and abundant networking opportunities. The plenary speaker was Dr. Don Chapman who has 55 years of fisheries experience. There were technical sessions that covered topics such as Marine Fishery Reserves, Fish Physiology, Salmonid Life History Investigations, Fish Passage Issues, and Fish Reintroduction Research. Networking activities included a student-mentor mixer, a banquet, and an auction/raffle (I co-chaired the raffle and auction this year and spent the last few months contacting donors, acquiring artwork, equipment, and fishing adventures). Another important role ORAFS plays is promoting the development of fisheries professionals. Student papers and posters were judged by fisheries professionals during the conference. Awards and scholarships were later presented to students recognizing their excellent work.