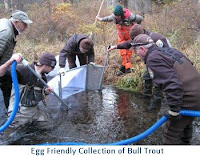 "The highlight of my year was working with biologists from US Fish and Wildlife Service, Oregon State University and the Confederated Tribes of the Warm Springs Indian Reservation. We collected naturally fertilized bull trout eggs from Canyon Creek, OR. to develop a captive rearing research program in support of bull trout conservation activities."
Bill Brignon

"The Highlight of the year for me was watching Condit Dam Come down. I wish I could have actually been there. From what I saw from the pictures and videos it looked like it was very exiting.
I have also, come to realize that we really are all lucky to have our jobs and work in an office where people work hard and care about their jobs."
Melissa Kennedy

"-commemorating reintroduced bull trout spawning (allegedly) in the clackamas river.
-working with the FWS's NWR system to get a crew out in the Nevada desert to see what fish were there and how they were distributed.
-helping to get Greg Silver through his first year of his master's program."
Tim Whitesel 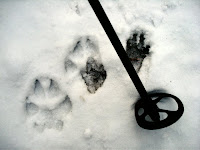 "My favorite thing this year was attending the Bandon NWR Restoration Dedication. It was a privilege to see the Feather Dance presented by the Coquille Indian Tribe."
Brook Silver

"Had a nice day in the latter part of September helping out with the Watershed Festival at Lewisville Park. This was the first time I had volunteered and would like to do it again next year. Enjoyed the CRFPO open house as well and looking forward to doing it again."
Larry Fishler 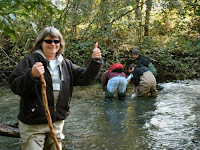 "Too many highlights for me to list but here's a few.
-Seeing wolf tracks along the SF Walla Walla River with Courtney
-Observing freshwater mussels in Merrill Creek
-All the great days spent out in the woods while mentoring students with the great folks from Wolftree."
Donna Allard

"My favorite things for 2011 were doing fish passage project site review visits with Ron Rhew and our partners on Oregon's north coast, getting to work with our resident superhero (Donna Allard) to start setting up a school education outreach project, participating in the Nehalem Conservation Action Plan where I met and worked closely with interesting landowners and agency folks, and seeing big fish and cool wildlife (cougar! elk!) while helping Courtney with the bull trout spawning surveys."
Amy Horstman 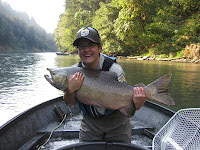 "I only have half a year to tell you about. Well, holding that Tule on the White Salmon was definitely a highlight! I got to go E-fishing with Greg and Brook in Tryon Creek. The Leavenworth fieldwork was also fun! We were surveying in and around Icicle Creek by the hatchery there. I've had a chance to work on so many different projects - it's never boring! All in all, these past 6 months have been a blast. This has been a wonderful place to work."
Nadia Jones

Paul Sankovich was co-author of a manuscript, titled An Evaluation of Redd Counts as a Measure of Bull Trout Population Size and Trend, accepted for publication in the North American Journal of Fisheries Management.

"-Finding that fish were using a recently re-connected slough by capturing over one hundred juvenile salmon in one trap.
-Finding that kayaking between sampling sites on the NWR's was the fastest and most enjoyable way to go.
-Hearing American bitterns everyday during a field trip last spring."
Jeff Johnson

"The highlight of my year was being accepted into the Service's Stepping Up to Leadership (SUTL) program and attending the first two weeks of the program at the National Conservation Training Center (NCTC) in Sheperdstown, WV. SUTL is a six month long program designed to improve leadership skills across the Service at the GS 11 and 12 level. It is a competitive application process for which only three people from Region 1 are chosen to attend each class. Being at NCTC, on the banks of the Potomac River, in October when the leaves were changing was beautiful. It was a great way to recharge the batteries. But, even better, being there and being a part of SUTL has allowed me to meet men and women from all over the country in multiple branches of the Service, and realize what an incredible agency for which I have the privilege of working."
Mike Hudson 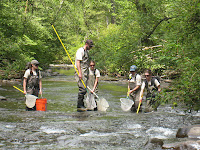 "We had another successful year of PIT tagging almost 3000 juvenile winter steelhead in Eagle Creek. This years highlights include: working with three new STEP students, leading a field crew that had more women than men on it (a rarity!), catching some really pretty Cutthroat trout (along with some really pretty winter seelhead), and watching everyone get excited when we started to catch fish!"
Maureen Kavanagh

"The 2011 highlight for me was being part of the fish salvage efforts on the white salmon river and watching the breaching of Condit dam."
Brian Davis 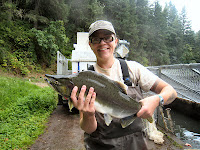 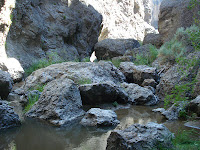 "A highlight was working with the Refuges I&M program that allowed us to bring on Ben and Cory, our college student crew, to conduct fish surveys in the Sheldon-Hart Mountain National Wildlife Refuge Complex. I spend some time with them hiking into truly spectacular canyon country to sample fish in remote areas and also visit a lot of dry sites. Another highlight was helping the marking crew to PIT tag fish at Little White Salmon NFH for a week. I did not get to stretch my legs much there, but certainly got to handle a lot of fish and the crew expanded my musical exposure."
Sam Lohr

"My highlight was seeing Joe's picture in all the media coverage for the work all of us did in the White Salmon River. Also being at Condit Dam the day of the breach, it was an amazing sight to see the reservoir drain and all the sediment and timber move through the hole in the dam."
Rod Engle

"seeing live bull trout for the first time ever, and watching them get released into the Clackamas River (which hadn't seen bull trout since 1963); watching the breaching of Condit Dam, meeting up with old friends at the national American Fisheries Society annual meeting in Seattle; and (of course) getting hitched to a wonderful man who appreciates Marci's love of The Life Aquatic!"
Marci Koski

"Looking at a potential project to aid restoring passage to Jackson Creek at Cape Lookout State Park, and in particular the really cool remnant spruce bog habitat, and decommissioning a portion of a ditched stream."
Ron Rhew

"My highlight of the year was helping Rod capture and transport Tules for the condit dam removal project. Some of the fish were as long as my legs."
David Hines

And now for the finale...
"We finished the Pacific Lamprey Assessment and Template for Conservation Measures. You may have seen it hanging around the copy room :)"
Christina Luzier 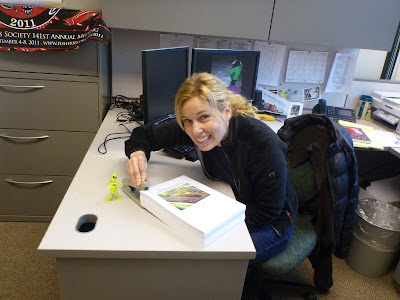 With that we wish you all a Happy Holiday. Look for us next year.
Posted by Columbia River Fisheries Program Office at 11:37 AM 2 comments: