Submitted by Michael Hudson
Posted by Columbia River Fisheries Program Office at 9:03 AM No comments:

Finding More Than You Are Looking For

This has been a fun spring because I had the opportunity to get out with a student intern and coworker.  They were continuing a project that our Office started a few years ago, which was to investigate reproductive timing of the western pearlshell mussel.  The project was conducted in a local stream, and involved inspecting adult mussels for signs of spawning and drift samples for larval mussels (i.e., glochidia, see previous blog for more on the life cycle of mussels).  Because glochidia are really small, around 1/20th of a millimeter, we use a very fine-mesh net to collect drifting material that is then preserved in alcohol.  The real work starts in the lab where we look for glochidia by picking through all the preserved material under a dissecting microscope.  Although this is often like “looking for a needle in a haystack” when a needle may not be there, the net collects other organisms, which makes the work interesting.

Below is what the material typically looks like magnified 20X.  Where’s “Glochido,” and can you identify some of the other organisms? 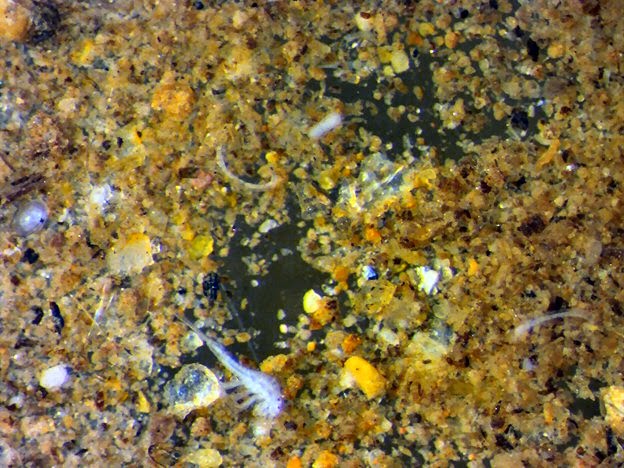 This is an early instar (i.e., stage) of a mayfly (Family—Baetidae).  These insects will grow a lot and emerge as winged adults that live for just a couple days or so. 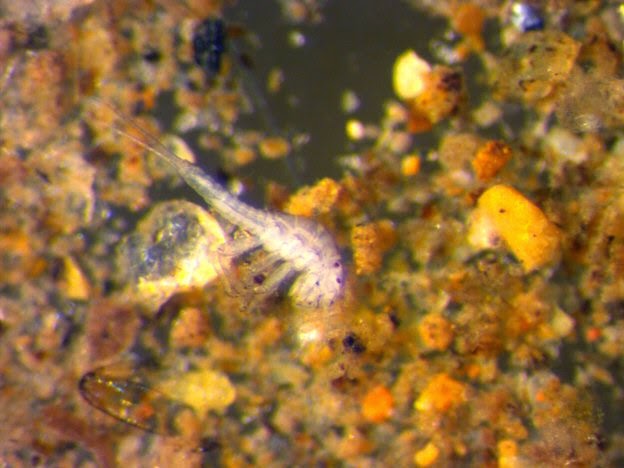 This is the larvae of a small fly called a midge (Family—Chironomidae).  Midges are an extremely diverse group.  Because they are usually very abundant, larval and adult midges are a major source of food for aquatic and terrestrial predators. 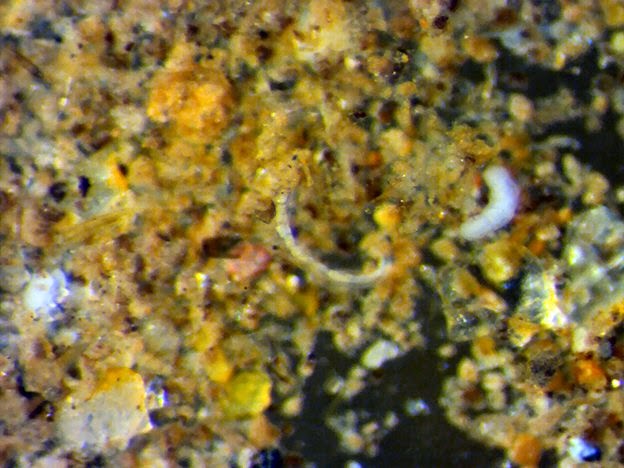 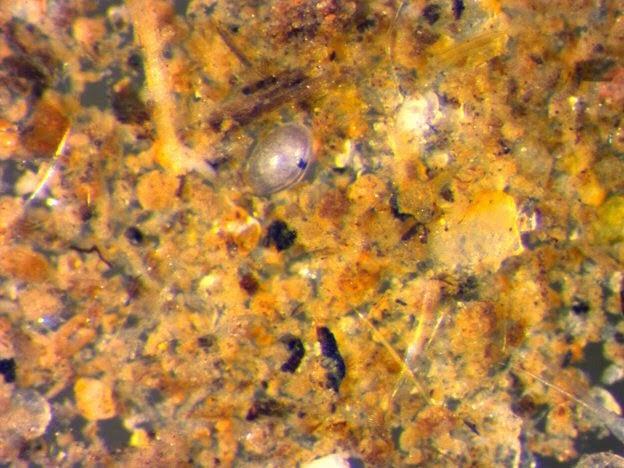 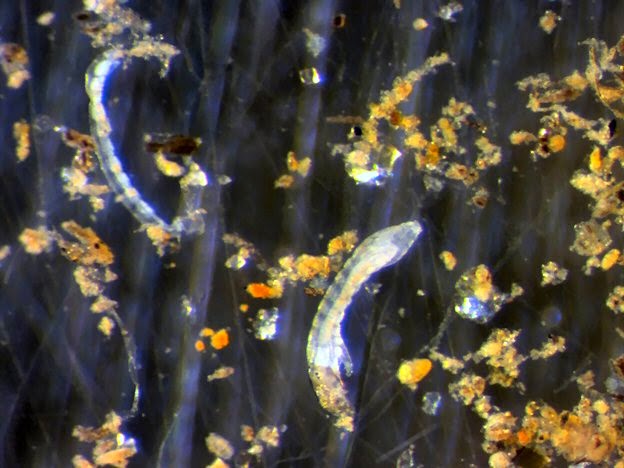 There’s “Glochido” (lightest object slightly up and left of center, no stripes or glasses).  This glochidia is about 0.06 mm long and appears small even when magnified 40X (same magnification used for all photos except the first one).  A key characteristic is the faint line appearing horizontally on it at this angle. 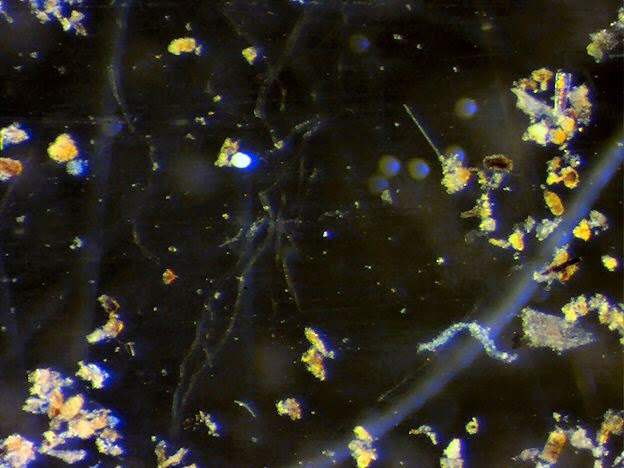 Posted by Columbia River Fisheries Program Office at 9:45 AM 1 comment:

Discovering New Interests: Looking back at my year with USFWS

(Foreword:  Sarah Martin is a student at Portland State University studying communication.  She will soon finish her one year communication and outreach internship with Region 1 Fisheries.)
I live with nature documentary fanatics.  In the evenings while I study or after I go to bed, Evan (my husband) and Huxley (our cat) lounge on the couch transfixed by the wonders of nature conveniently harnessed and transmitted indoors.  Blue Planet, Planet Earth, Life, Life of Birds, and Life of Mammals are among their favorites, but I’ve never taken the time to develop an interest.


I’ve never developed an interest, that is, until this past year when I’ve had the opportunity to benefit from first-hand experience and one-on-one Q and A sessions with fish and aquatic resource experts.  I tease my friend Donna, a Fish Biologist at the Columbia River Fisheries Resource Office, that she has become my very own nature documentary.  I always look forward to our chats when she shares her knowledge about interesting aquatic species like fresh water mussels, Pacific Lamprey, and white sturgeon.


You might ask why my interests have developed over the past year.  The answer: Opportunity!


I am a student at Portland State University pursuing a master’s degree in communication.  Although I don’t have a background in aquaculture or fish biology, I have been lucky enough to have a one year graduate assistantship with Fishery Resources to help with communication and outreach initiatives.  As part of the communication work I do, I read technical information and talk to experts about scientific findings, aquatic species, and conservation then write short stories or summaries for people like me (i.e., non-experts).  So, while it may be surprising, my naiveté on the subject is actually an asset because I ask a lot of questions that other non-experts might wonder about.


As it turns out, my budding interest is infectious.  Well, perhaps it’s more accurate to call it “communicable.”  The factoids that Donna and other experts have shared with me, along with my hands-on experiences helping with spawning at hatcheries and stream sampling, have a way of sneaking into my daily conversations.  A few examples…


·        After helping with spawning at Carson National Fish Hatchery last August, I tried to impress Evan with my newfound knowledge. Unfortunately, it turns out that he and Huxley had already seen a few spawning documentaries so I wasn’t able to teach him anything new.  I did, however, gloat about the fact that I got to experience spawning for real instead of just in documentary format!


·        After stream sampling with a crew at Abernathy Fish Technology Center last September, I found myself raving to anyone who would listen about the wonders of waders (they are pretty incredible after all), not to mention the interesting studies and genetic research that the folks at the Technology Center do. 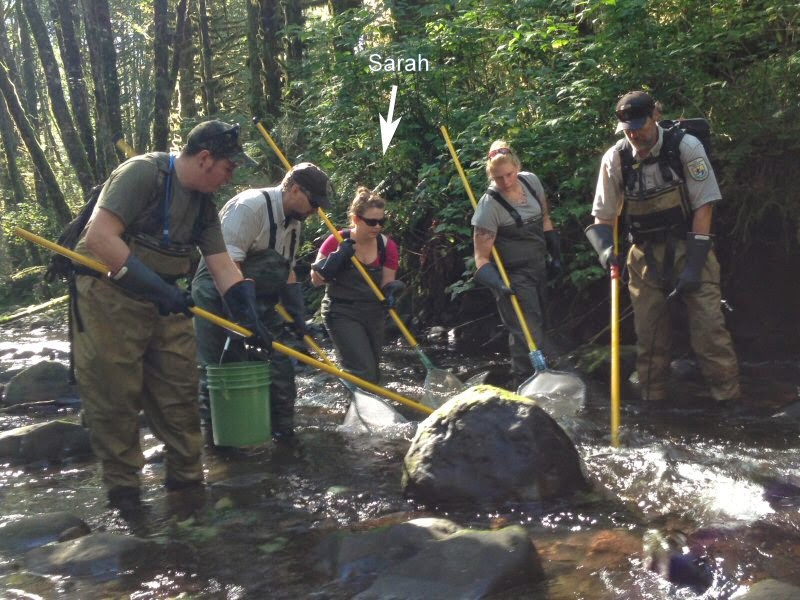 
These are just a few of the instances when the important and interesting work that the Service does have snuck into my daily conversations.  Prior to my first day last July, I didn’t know I would be so interested.  Now that my one-year appointment with the Service is nearly complete, I will miss the opportunities for hands-on experience and one-on-one Q and A sessions with experts.  Evan and Huxley might be able to persuade me to take in a documentary or two to fill the void.  And, maybe I can persuade Evan to do a little citizen science with me (tales of our adventures will have to suffice for Huxley because he’ll have to stay home)!
Posted by Columbia River Fisheries Program Office at 9:10 AM No comments: