I would like to introduce you to Christina Uh.  She began working for the Columbia River Fisheries Program Office in July of 2012.  She was hired through the Pathways program.   Pathways is a hiring program designed by the Office of Personnel Management for current students and recent graduates seeking careers with the federal government.    Christina is of Mayan and Navajo descent and is the first member of her family to attend college.   She is a student at Portland State University seeking a degree in Environmental Sciences.  Christina‘s anatomy and physiology teacher at Forest Gove High School, Dr. Romanick,  saw tremendous potential in Christina and encouraged her to further her education.  Although she was hired as an office assistant, Christina has had a variety of experiences working for the Fish and Wildlife Service.    Over the summer, she took the lead in a lamprey feeding study at Eagle Creek National Fish Hatchery.   Some of her other experiences include volunteering to herd deer on the Willapa National Wildlife Refuge,  helping with electrofishing surveys, and even cleaning fish hatchery raceways.    In addition to working for the CRFPO, Christina also works at the Native America Student and Community Center while attending Portland State.    Christina has been a tremendous addition to the CRFPO and we support her in her pursuit of a career in natural resources. 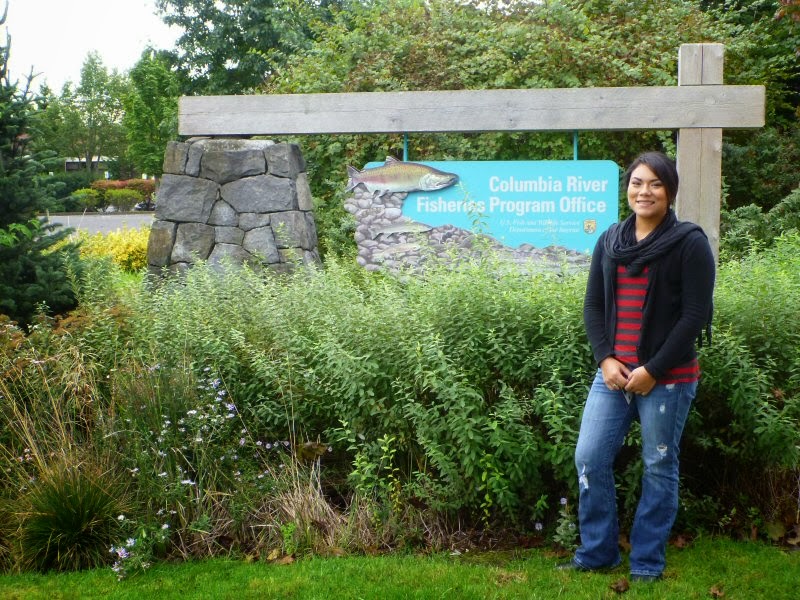 Submitted by Larry Fishler﻿
Posted by Columbia River Fisheries Program Office at 9:21 AM No comments:

For those of us who have ever sampled fish, the three-spined stickleback is no stranger.  There have been times I have counted hundreds, sometimes thousands of stickleback in a day.  In honor of this little, sometimes often overlooked fish, I'd like to share some stickleback trivia with you.

Trivia #1
The common name of this fish is derived from the three sharp spines on the back in front of the dorsal fin.  The sides of the stickleback are usually covered with large bony plates.

Trivia #2
During mating season, the male develops bright colors and becomes quite aggressive.  They perform a courtship ritual to entice females to lay their eggs inside a hollow nest. After the female lays her eggs and leaves the nest, the male takes over parental duties, guarding the fertilized eggs, and if necessary, fanning them with his tail to provide them with oxygen. 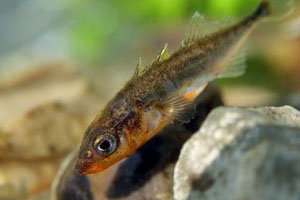 Trivia #3
The colorful, aggressive male sticklebacks, became excellent examples of  fixed-action patterns of behavior when jealous stickleback males held in aquaria would try to attack red British mail trucks when they could see them through the glass of their tanks.  Read more.

Trivia #3
Sticklebacks can be found in fresh, brackish, or salt water and is native to much of northern Europe, northern Asia, and North America.

Trivia #4
Catches of stickleback were once so numerous that the fish were used as fertilizer for farmlands in Europe.

Trivia #5
In Britain, the stickleback is sometimes referred to as a "tiddler", the first small fish caught by school children.  Charles Dickens wrote of the stickleback in the Pickwick Papers and called them "tiddle-bats".

Posted by Columbia River Fisheries Program Office at 9:11 AM No comments: