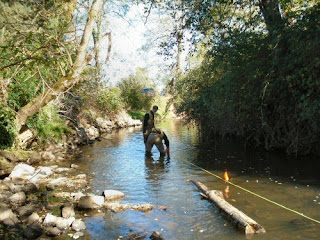 Back in April of this year, I blogged a bit about a program called Cascade Stream Watch. In that program, after an initial introduction to aquatic ecology in the classroom, students spend a day in the field studying watersheds, macroinvertebrates, and fish.

Another one of Wolftree's programs is called Project Based Learning. The students in this program are visited many times to acquaint them with their particular project, whether it be flying squirrels or beavers. They also get to go into the field to do their studies more than once. Last year I was lucky enough to spend three field days with the same group of kids from BizTech as they carried out their project. It was great to spend time with the same students as well as to see them become more proficient at collecting their data.

This year, I once again had the opportunity to mentor high school students from BizTech. Teacher Amy Lindahl's classes are working with the Johnson Creek Watershed Council, investigating the occurrence of the freshwater mussel, Margaritifera falcata, in Johnson Creek. The mussel is known to occur in the upper reaches of the creek, but it's full distribution in the watershed is unknown. 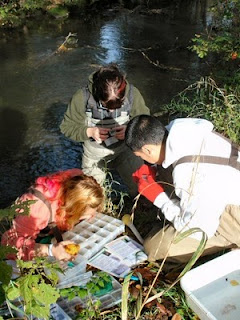 The students chose 3 locations representing the upper, middle, and lower watershed to carry out their study. Aside from looking for mussels, students collected and studied the macroinvertebrate population, collected water quality data and habitat variables, and calculated stream discharge at the three locations.

Although live western pearlshells were found at the upper site, the students found only the remains of the pearlshell(shells) at the middle site. They did however find evidence of the floater, Anodonta Clade 1 at both the middle and lower site. The non-native Asian clam was also abundant at both of these sites.

Now that the field work is finished, the students will begin their data analysis. This spring, they will present their findings at the Student Summit at Timberline Lodge. It will be quite interesting to hear what they have learned. And the best part about this project is that the data will be used by the watershed council as they continue their investigation into the occurrence of freshwater mussels in Johnson Creek. 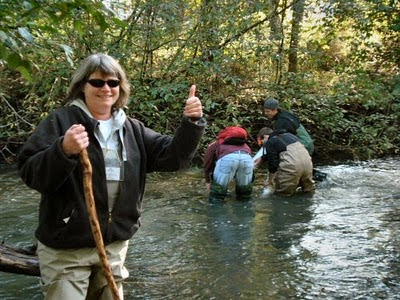 Email ThisBlogThis!Share to TwitterShare to FacebookShare to Pinterest
Labels: project based learning, wolftree

For the third year, the CRFPO was able to provide a field trip for students from Heritage High School through the "Connecting People with Nature" small grant fund. This year we traveled to Steigerwald National Wildlife Refuge to get outside. We collected some aquatic insects and water samples from Gibbons Creek to assess the water quality. Lots of insects were collected and identified including stoneflies, mayflies, and caddisflies. The students determined from the large diversity of insects and high levels of dissolved oxygen, that the stream was fairly healthy. While collecting insects, a coho fry and red-legged frog were also scooped up, further indicating a stream that supports salmon and amphibians. 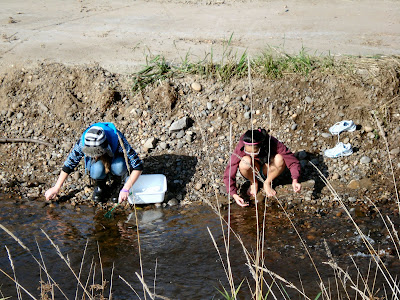 After a bit of data collection, the entire group embarked on a discovery hike down the trail to the Columbia River. We talked about wetlands, found insects and more frogs along the way. Trees and other vegetation were identified through use of field guides. The students hypothesized about what might be living in or using some of the many wetland areas we crossed. 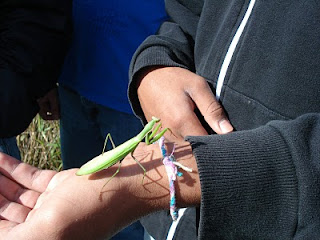 All in all, it was a great day. The students were engaged the whole time and very sad when their field day was nearing to an end. And so was I. I encouraged them all to bring their families back down to the refuge anytime for another hike and I bet some of them will. 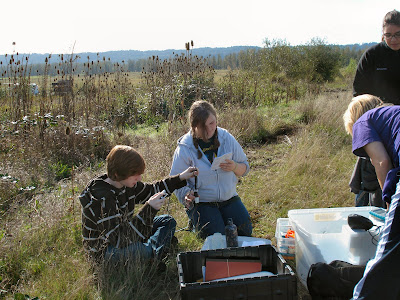 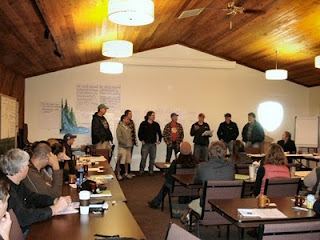 The Columbia River Fisheries Program Office recently completed an off-site, two-day retreat. The retreat focus was on breaking down team barriers and improving our inter-office communication and collaboration. We also thought about climate change and identified office activities and projects to help address that huge problem looming in front of us. A number of great ideas and solutions were generated. But the retreat was much more than that.

On the morning of second day it became clear to me. I knew the office environment was pretty darn good already, heck I’ve been in the office now approaching 20 years, but I recognized that the office was evolving into something approaching phenomenal. What was phenomenal was seeing staff mix together into groups they do not regularly work with and coming up with creative ideas and solutions to problems. What was phenomenal was seeing and hearing from staff who do not normally speak up and at times speaking quite eloquently. What was phenomenal was hearing ideas and solutions from younger staff. I already knew that these folks were smart, but I also recognized that they will carry on our natural resource mission much further than what I thought was possible. 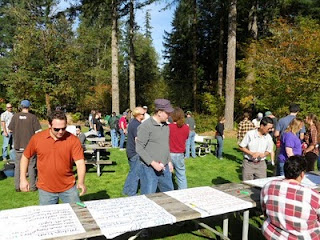 We still have a lot of work to do to implement our creative ideas from the retreat, but overall I would say it was quite successful. A number of factors led to that success, those being the off-site location, the neutral/professional skilled facilitation, the openness of staff, the openness of the Project Leadership, and the preparation and on-site organization led by our administrative staff. Thank you.

Submitted by Doug Olson
Posted by Columbia River Fisheries Program Office at 10:22 AM No comments: 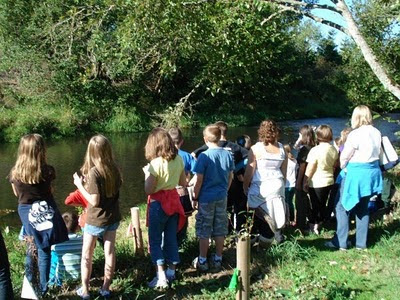 Each year, around this time, a watershed festival is held for students in Clark County. The CRFPO, Clark County, the city of Vancouver, Columbia Springs, and Clark PUD all contribute to making the event a success. We also depend on many other agencies and volunteers to present to the students or help in other ways. The festival is so popular with the teachers that it usually fills up within a week of opening registration. This year we hosted 30 classes of 4th graders during the two day event. 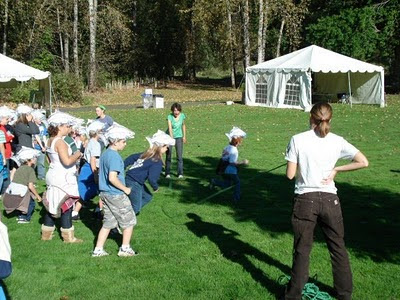 This year the students learned alot about watersheds, streams, and wetlands. Other presentations included a live demonstration with birds of prey, a water and energy conservation activity called the Energy Jeopardy game, and an exploration of decomposition and the role that small critters play in soil formation. All of the presentations involved hands on activities which is what makes this festival a fun place to learn. The weather was terrific and everyone had fun. I for one, cannot ask for anything more than that.
Submitted by Donna Allard
Posted by Columbia River Fisheries Program Office at 2:26 PM 1 comment: