Creatures of the Night

With the nights growing longer and Halloween just around the corner, the time seemed to perfect to have a family event called "Creatures of the Night". The CRFPO sponsored the free event. 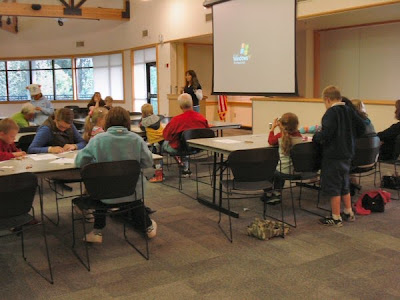 Over 30 kids and their parents came to the program. During the evening, we learned about bats, owls, opossums, beavers, and raccoons. A presentation featuring Simon, the screech owl, was a hit for both young and old. We also dissected owl pellets, an activity that most of the people had never done before. The evening ended with a walk along the river. On the way, the bat detector I held gave off the sounds of a bat, although we did not see it. We were later rewarded with a great view of a few bats hunting through the wetlands. From the reviews, it seems that everyone enjoyed the program and would like to see more events like it. 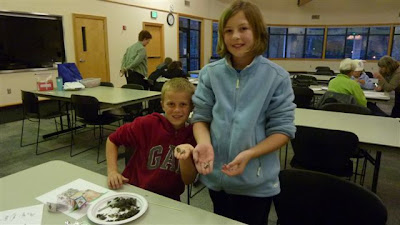 A Visit to the Gorge 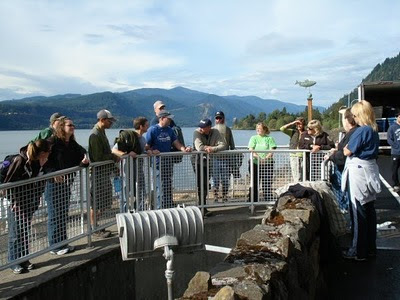 Last Friday, Amy, the educator for Columbia Springs, and I held the 3rd annual fish workshop called Healthy Water Habitats and Hatchery Tour. We met 12 teachers at Columbia Springs and carpooled up to Spring Creek National Fish Hatchery (NFH) where spawning activities were in full swing. We left a rainy Vancouver and arrived at the hatchery to find a warm, sunny day. After a brief introduction to the PIT (passive integrated transponder) tag detector station and a short visit to the fish ladder, the teachers suited up into raingear and had the chance to spawn some of the Tule fall chinook salmon. They got a first hand, up close look at the bustling activities that take place this time each fall. In addition to spawning activities, excess fish were being loaded into totes in preparation for a trip to the food bank. 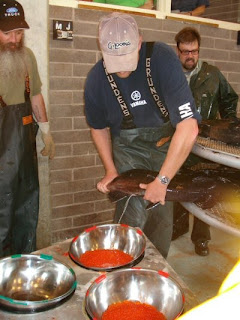 Just before lunch, we headed up to Carson NFH. After lunch, I gave a short presentation on an education trunk I developed last year called "The Columbia River" trunk. It highlights some of my favorite species including coastal cutthroat trout, Pacific lamprey, and Western Pearlshell mussels. A last section raises awareness to the threats of aquatic nuisance species.


We reviewed some of the activities in the trunk and 'played' a short activity called "Water address". This activity allows students to identify plants and animals and their habitats by analyzing clues that describe water-related adaptations of aquatic and terrestrial organisms. At this point we were running out of time but not before we learned more about Carson NFH from the assistant manager, Thomas.All in all, the day was great, the teachers were an exceptional bunch, and the rain held off until the end of the day. Can't ask for more than that. 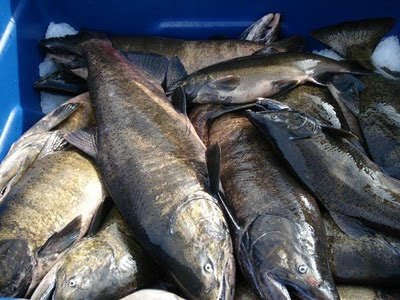 My Time with the Lovely Lamprey

Working with the US Fish and Wildlife service has been one of the best experiences of my life thus far. In 21 years of existence I cannot say that I enjoyed working as much as I did here. I looked forward to every day and what it could possibly entail. Most days included trekking through dense woods with praying mantis probes for arms while simultaneously getting bitten by numerous amounts of mosquitos. Sweating through entire shirts was inevitable and wiping dirt off my face or picking tree parts out of my hair was pointless. But I would not have wanted it any other way. I got to see things that most people will never see in their lives. Gorgeous 100 ft. waterfalls that are in the middle of nowhere, breathtaking valleys six miles into a hike that you had to bushwhack to get to, bald eagles flying right over you, riding the white caps in the Columbia River Gorge and watching the sun come up, just for some examples. I felt lucky to have this opportunity every day and I could never replace the memories I have from this job. On top of all of that beauty I got to study one of the coolest, most interesting fish out there. Lamprey are so understudied and so misunderstood. I would feel honored if I were able to engage in future studies that help to create more public awareness about these creatures and help eradicate the negative connotation that is most commonly associated with them. This job has excited me into wanting my Master’s to focus on some aspect of lamprey and I can’t wait to do that. 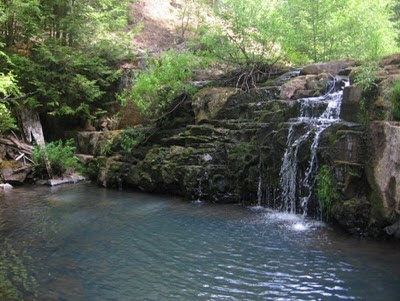 Before being hired in May of 2009, I had never heard of lamprey. I’m not going to lie, at first I was a little bummed that I wasn’t going to be working with salmon or some other type of more “fish-like” fish. I grew up fishing and hiking so I had fallen in love with the image of what is more commonly linked to the word ‘fish’. But I immediately learned to love lamprey and my love has only grown over the last two summers. I worked with Pacific lamprey (Entosphenus tridentatus) and Western brook lamprey (Lampetra richardsoni). Pacifics are generally grayer in color with a lighter caudal ridge and a darker fin (a fade) while Western brooks are generally more olive colored with a dark caudal ridge and a clearer or speckled fin. The westerns also usually have a yellow stripe that runs from their anus to the tip of their caudal ridge. It amazes me that they are blind for the larger part of their life and have managed to exist since before dinosaurs were around. They live in the sediment in creeks and rivers during their ammoceote phase (5-7 years) filtering out nutrients from the water. Ammoceotes are the life stage that I mostly was working with but I would see the occasional transformer or adult. Pacifics are an anadromous fish. They transform into macropthalmia (macs) and out-migrate to the ocean where they feed off of the blood of other fishes. Western brook lamprey transform and stay in freshwater to spawn and die. These fish have been able to withstand and adjust to catastrophic world events that wiped out everything else and yet humans have presumably managed to make enough of an impact to cause a huge decline in the numbers of lamprey migrating back from the oceans to spawn. We have been around for a miniscule fraction of the time that lamprey have existed but have impacted them as though we were working to kill them off all along. There is a lot of good work being done to create better Pacific lamprey passage through dams and decrease mortalities of both out migrating macs and adults coming back to spawn but population counts have shown a steady decline in numbers, especially more recently. I am anxious to see what is done in the near future to improve their situation and hope to be involved in some way. 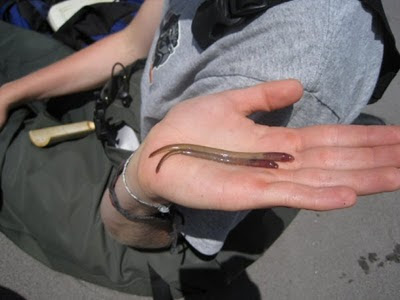 Lamprey have grabbed my heart and I am so interested and excited to study them more. I love my team (LAMPREY ROYAL!!) and thank you so much for teaching me and making this experience what it was. I have grown as a student and a person by being part of the STEP (Student Temporary Employment Program) and I have gained knowledge that could never be taught in a classroom.

The Search for a “Fish-Friendly” Tide Gate

I never thought that I’d learn so much about tide gates. I’m a biologist, so I know about fish identification, important measures of fish habitat, and how to catch fish in a scientific context. But why would I need to know anything about tide gates? Well, tide gates can have a big impact on the quality of habitat and the ability of fish to enter and exit these habitats. Tide gates along with levees (or “dikes”) are used in tidal areas of the Columbia River and other coastal rivers to help keep water out of the natural floodplain of the river. Tide gates let water out when the tide is receding and block water from entering as the tide comes back in. The floodplain can then be used for cropland, grazing or other development without the threat of seasonal or daily flooding. 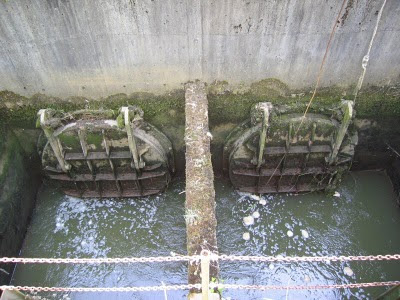 Old-style, top-hinge, steel tide gates are difficult for fish to get past and don’t allow any exchange of water.
The Columbia River has experienced over 100 years of flood control. Through changes in river flow from dam regulation and the installation of levees and tide gates, the amount of shallow water habitat in the Columbia River has been greatly reduced. It’s estimated that over 60% of historical tidal freshwater areas of the lower Columbia River has been lost. Much of this lost habitat is behind levees and tide gates. These areas were where young salmon grew and hid from predators before heading to the ocean. Now, these young salmon have difficulty accessing feeding areas behind the tide gates and much of the habitat behind the gates is of poor quality. The low quality of the habitat is mostly due to the lack of water exchange between the river and the slough habitat behind the gates. This can cause higher water temperatures than salmon can tolerate. These higher temperatures can also be good for non-native fish species, like largemouth bass, that will prey on young salmon. 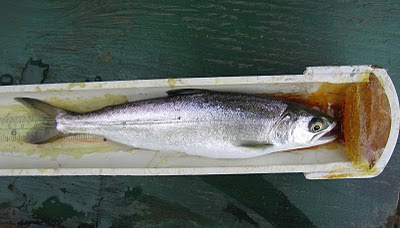 Fortunately, restoration is taking place in parts of the Columbia River Estuary to recover some of this lost habitat. These restoration projects can take many forms. Sometimes it is possible to remove a levee or tide gate and allow the river to spill into its historic floodplain. Other times, flood protection must be maintained, so the options available for land managers are more limited. In these situations, new tide gate designs are being tested to determine if they allow better fish passage and water flow between the river and flood plain.

Julia Butler Hansen National Wildlife Refuge was created in 1972 for the protection and management of the endangered Columbian White-Tailed Deer. Land managed by the refuge includes uplands, riparian area (land along the water), wetlands and sloughs. Restoration to improve aquatic habitats, including the replacement of older tide gates with newly designed tide gates, has been occurring since 2007. Because the primary purpose of the Refuge is to protect White-Tailed Deer, removing levees to allow natural flooding of the refuge is not an option. Instead tide gates designed to allow improved fish passage and tidal water exchange have been installed with the hope that the aquatic habitat behind the levees improve and that fish have an easier time passing the gates. 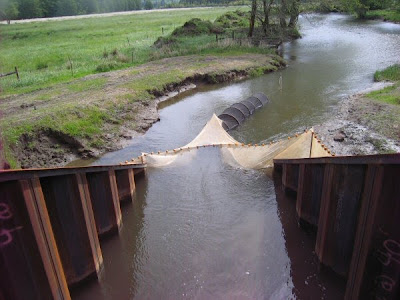 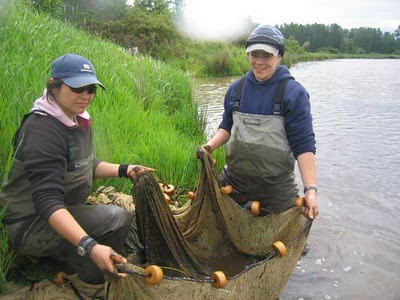 We will be collecting information on fish and these habitats through the spring of 2012. At that point we expect to have a pretty good idea of whether there is an improvement in fish access and habitat quality and, if so, how much of an improvement. If results are good, these types of tide gates will likely be used in other restoration projects where some level of flood control is needed but improvement for fish is desired. 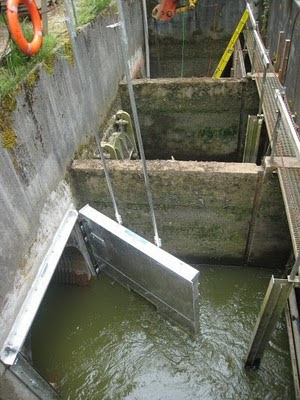