Career Day at the CRFPO

The school bus stopped in front of the CRFPO first thing yesterday morning, an indication that the 3rd annual “Career Day” was about to begin.  This year, a very enthusiastic  group of 6th – 8th grade students from Skyridge Middle School (32 in all) joined us for a half day filled with fish related activities.  Students rotated through four activities which included dissecting a trout and studying its internal anatomy, radio-tracking fish, learning about aquatic nuisance species by playing a full sized trivia board game, and playing 5 holes of mini golf while learning about salmon migration.  The day ended with lunch and a discussion about careers and fish management with the team of biologists who led the field activities.  Just before leaving for the day, all of the students eagerly raised their hands when asked if they would like to join us again; a sure sign of the day’s success.


Submitted by Donna Allard
Posted by Columbia River Fisheries Program Office at 9:10 AM No comments:

Blast from the Past: 1953 – Walt Disney’s Land of Exploration

In March, 1953 photographer Bert Harwell, nationally known wildlife photographer and bird caller, visited Malheur NWR. He was on assignment from Disney and showed a number of pictures while he was there which generated a lot of interest locally about the birdlife frequenting the refuge.  Bert Harwell used his images in films such as Disney’s “A True Life Adventure: The Vanishing Prairie” and “Canada West”. 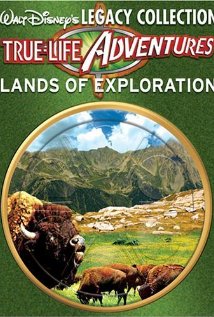 Posted by Columbia River Fisheries Program Office at 11:40 AM 1 comment:

The sound of crickets chirping filled the room, only this was a completely artificially produced sound.  On the computer screen flashed “Code 17”, “Code 17”, “Code 17”.  The radio-tag was sending out its signal, waiting to be heard by those who were interested.  This small tag, measuring 5 mm by 10mm and weighing barely 0.3 grams, was placed into a bath of disinfectant, soon to be attached to a juvenile spring Chinook salmon.  It would accompany the fish on its journey to the sea.  The process had begun.

Jen placed an anesthetized fish onto the operating platform, belly up.  A tube was placed into the mouth of the fish, and a stream of water began flowing over the gills.  This water had a small concentration of anesthetic mixed in to keep the fish sedated throughout the procedure.  The fish’s gills rhythmically contracted.  Everything looked good.  Jen took a micro-scalpel and carefully made a small incision in the fish’s belly, just below the pelvic girdle.  She then used a small needle, covered by a plastic catheter to protect vital organs, to poke a hole in the fish’s abdominal wall.  The antenna of the radio-tag was then threaded through the catheter so that the antenna trailed outside the body wall, while the radio-tag itself could be placed inside the fish at the point of the first incision.  Satisfied that everything looked in place, Jen then proceeded to close the incision and finish the surgery.  Two sutures, using a modified surgeon’s knot, were “thrown” to keep the incision point tight and allow for natural healing.  After the first suture was complete, the flow of anesthetic water through the fish’s gills was switched so that only pure freshwater was flowing, beginning the process of recovery for the fish.  As the second suture was finished, Brian prepared a recovery bucket full of water with elevated dissolved oxygen levels.  Jen then placed the fish into the recovery bucket, and the time of surgery was called out and recorded.  Four minutes twenty seconds.  That was the length of time the surgery took, from placing the fish on the operating platform to depositing it into the recovery bucket.  Thirty seconds.  That was the time it took the fish to become fully awake and recovered from the surgery.  The fish was then placed into a holding tank inside the hatchery.  Code 17 was now the signal that would be broadcasting out from inside the fish for the next 42 days (the battery life of the radio-tag).  Code 17 was how we would now refer to this previously anonymous fish.  Code 17 was now part of our family, we would grow a special bond with it as we tracked its movement and progress on its journey to the sea.

Why did we go through all of this effort to place a radio-tag in a fish?  Why did we do this 78 other times this April?  Why had Brian and Jen practiced surgery techniques for weeks prior to this?  Why had staff from Warm Springs NFH, the Confederated Tribes of the Warm Springs Reservation of Oregon, and the USFWS Columbia River Fisheries Program Office devoted so much time and effort to this project?  The radio-tagging project was part of a broader evaluation looking at juvenile survival of spring Chinook salmon released from Warm Springs NFH.  Warm Springs NFH, located on the Warm Springs Indian Reservation, annually releases up to 750,000 hatchery juveniles in order to provide adult spring Chinook salmon for harvest in the Columbia and Deschutes rivers.  The USFWS and the Confederated Tribes of the Warm Springs Reservation of Oregon have a comprehensive monitoring program designed to evaluate the effectiveness of hatchery rearing and release strategies in meeting the hatchery’s production and harvest goals.  Based on some previous evaluations using Passive Integrated Transponder (PIT) tags, it appeared that on average, less than half of the juveniles released from the hatchery survived to make it to Bonneville Dam, located on the mainstem Columbia River approximately 246 river kilometers downstream from the hatchery.  We wanted to know if the majority of this apparent juvenile mortality was occurring within the Deschutes River basin or was it occurring in the mainstem Columbia River.
By radio-tagging a representative portion of the hatchery release, and then tracking the movements of the tagged fish in the Deschutes basin, we hope to determine whether fish are successfully making it to the mainstem Columbia River or whether mortality is occurring in the Deschutes.  Based on what we find, managers may be able to target actions to try to reduce the apparent mortality of the hatchery releases.  Surgically tagging the fish is only the first step in this process.  Tagged fish were then released into the Warm Springs River, along with the rest of the hatchery’s untagged population.  We placed a series of telemetry fixed-site stations throughout the Warm Springs and Deschutes rivers.  Fixed-site stations scanned the radio frequencies and recorded which codes were swimming past.  Based on the detection histories at each of the fixed-sites, we can estimate survival of the radio-tagged fish to various points within the basin.

Code 17.  How is it doing?  Well, apparently darn good!  The fish was tagged on April 2nd and released from the hatchery on April 4th.  Within eight hours of release, good old Code 17 had swum out of the Warm Springs River and into the Deschutes.  Less than thirty hours later it had swum past our fixed-site station at the mouth of the Deschutes River and was on its way down the Columbia.  That is swimming over 150 river kilometers of river in around two days!  This, from a fish that was just 132 mm in length.  We bid you adieu, Code 17, and hope your journey to the ocean is fast and uneventful.  Perhaps we will see you again in a couple of years, all grown and mature.  Maybe you will tell us more about your adventures upon your return.


Submitted by David Hand
Posted by Columbia River Fisheries Program Office at 11:34 AM No comments:

In September 1941, Malheur NWR entered a parade float in the Harney County Fair parade. The float itself is a duck cage. The ducks had been banded prior to and were released during the parade. It was awarded 1st place in the section representing government and municipal floats. This marked the 3rd year in a row that they won first place. It’s probably a hard act to beat. I doubt city hall had birds to release. And who’s driving the tank? 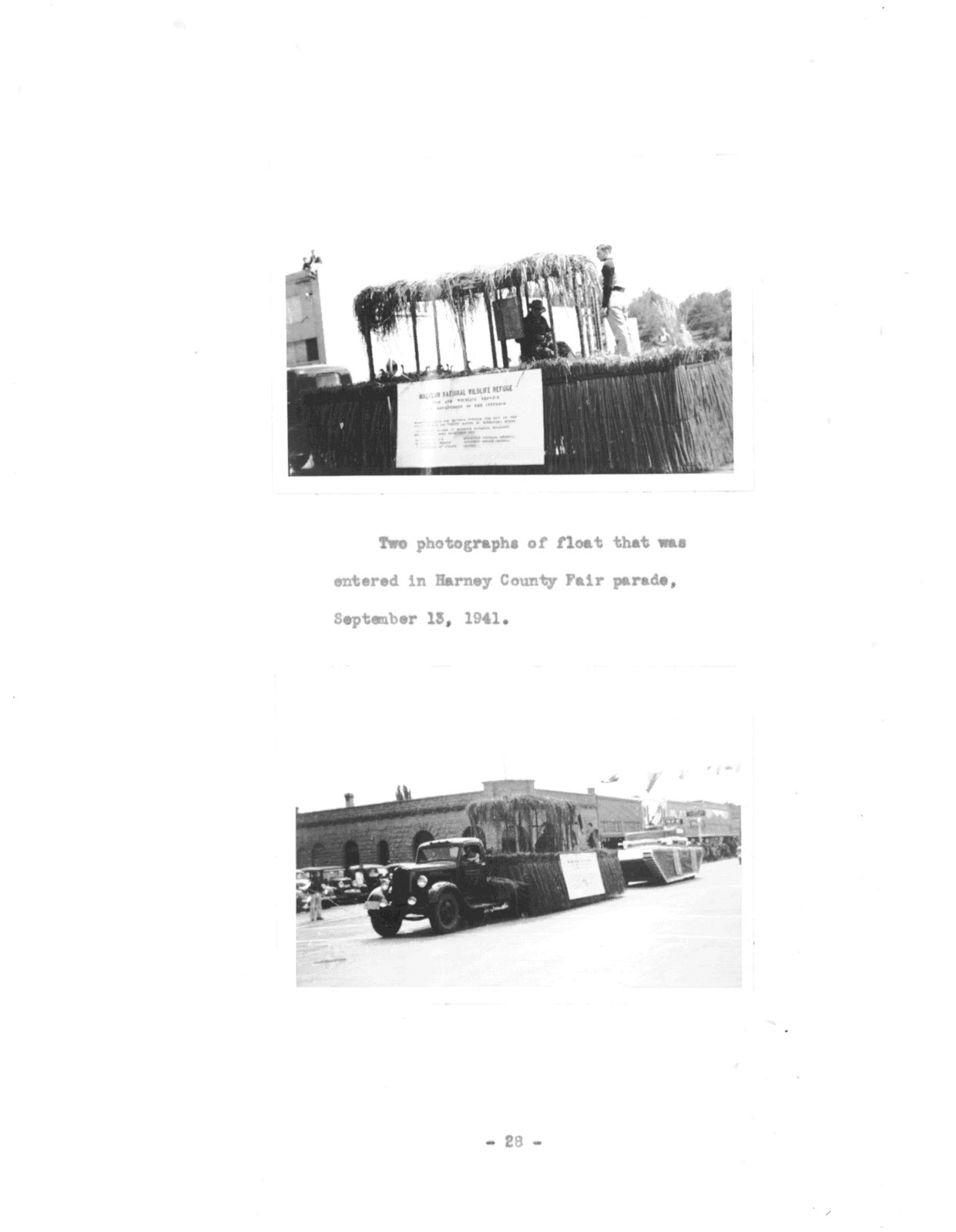 Posted by Columbia River Fisheries Program Office at 7:42 AM 1 comment: