In celebration of Earth Day, Vernonia schools held their own SOLV day.  SOLV is the acronym for Stop Oregon Litter and Vandalism.  Kids from kindergarten to high school participated at the event which took place just a short walk from the school, in a newly developed wetland site.  The site is being developed as mitigation for the brand new school Vernonia students will be attending next year. 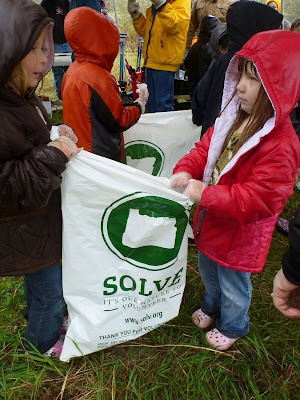 After a brief introduction from some experts on tool safety and non-native plants, students got to work.  High school students from the forestry club paired up with younger students as they planted trees and removed invasive, non native plants from the area.  Trash was also picked up along the trail that will soon surround the wetland and connect with the Banks to Vernonia trail. 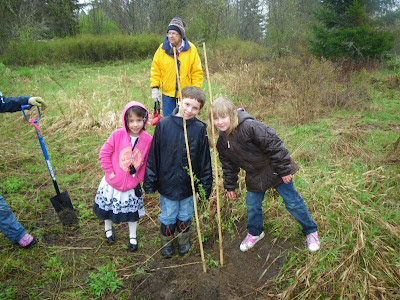 By the end of the day, scotch broom was piled high in many areas.  The students also planted well over a couple hundred native plants and trees including cedar, spruce, native rose, snowberry, and cottonwood.
All in all, the students, especially the younger ones were very excited to get their hands muddy while planting trees and pulling weeds.  For years to come now, the students will be able to visit this site and remember the time spent out there. 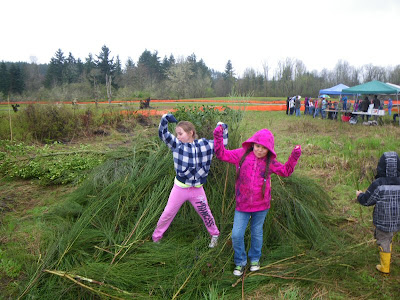 On Thursday morning I headed out to Career Day at Ridgefield High school.  I hadn’t been in a High School environment since my youngest child graduated over 10 years ago!  I was really looking forward to sharing what I do behind my little ole desk.  After all, I remember how excited my kids were to visit my office on “take your child to work day”

After meeting in the Library and being sent to our assigned locations, both Marci Koski and I headed to the 200 Building to the Science room.  We shared our time with a Physical Therapist.  We each had 10 minutes to quickly introduce ourselves and to share what we do for a living.

Marci was right on task in sharing her slides of the fish marking trailers, electrofishing, and describing her role as a Fishery Biologist.  She caught the attention of the students by also showing them a lamprey and other visual aids.

I then had my chance to introduce myself and to share what a Budget Technician/Procurement official does.  Forgetting that I was: 1) in a non-government environment, I had thrown out acronyms and terms such as DOD, BPA, “acquisition”, “procurement” etc. faster than I imagined.  (It was later revealed to me that the students would more than likely not understand them.) and 2)  my career is not really as exciting as a biologist who gets to go and gallivant in the great outdoors.  Hmmm-I’m going to have to improve on it---but 10 minutes to articulate just what procurement is, and I am assuming the definitions of what budgets are; I had better come up with something better than leaving them glassy-eyed.

So with a small space of time between classes to recover we learned about the students.  Their instructor shared their habits, routines, mannerisms, and their studies.  The instructor also shared the hurdles and challenges the schools were trying to overcome.  There were also goals the school district as a whole was trying to incorporate in order to do well in state tests.

So with a little more insight I re-approached my short little speech with a few minor changes in being more explicative and determined that next time I would bring a huge volume of the FAR (Federal Acquisition Regulations) and some hand puppets to demonstrate the real life Administrative Office scenarios.

After our introductions, Marci and I ended up in a different room where the students could come and ask questions.  A few came and shared their love of fishing, actually one wanted to be a Marine Biologist (I think he was the most sincere one of the group and knew the path he wanted to take).  We were in the same room as a CSI career person (tough competition), but Marci was whipping out the answers and directing the students to different programs that FWS offers.

At any rate, I’ll drum it up to being a unique experience and actually seeing that jobs such as mine may really draw those who are better educated (not necessarily addressing teens, but College students as my job isn’t as colorful) you know like business centered individuals who prefer to have a more serene government job.  Oh, the stories I could tell of the purchases that have been illegally made that I have heard about in training courses and the punishments we can face if we don’t follow the letter of the law, can you spell J-A-I-L.  On a personal note, my dear brother was in the room next door sharing his career of being a Corporate Lawyer—you have heard of Law & Order (a sound of a Judges gavel slamming the podium—da dum).