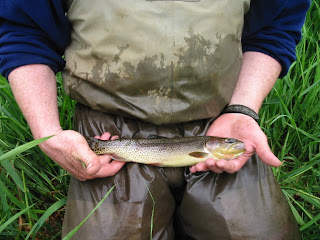 These tidal marshes are interesting systems, unlike anything I had worked on previously. They are located in areas where freshwater meets seawater, the estuary. Just about every stream that meets the ocean has an estuary. You may be familiar with some of the bigger, better known ones: Chesapeake Bay, San Francisco Bay, the lower Columbia River below Bonneville Dam. From a fish perspective, it is also where you will find an interesting mix of freshwater and marine species, depending on the time of year: juvenile salmon, trout, stickleback, sculpin, shiner perch, flatfish. Estuaries are extremely productive areas, providing lots of food for hungry growing fish, and tidal marshes are the safe havens of the estuary, providing cover for smaller fish and a nutrient source. 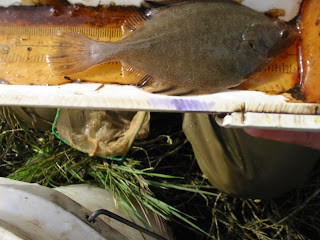 Many historic tidal marshes along the Oregon Coast are located behind dykes built in the early part of the last century, cross-stitched with irrigation/drainage canals, providing pasture land for livestock. Typically a system of tide gates regulates the exchange of water as the tide comes up and recedes, controlling flooding behind the tide gate (http://fish-notes.blogspot.com/2010/09/search-for-fish-friendly-tide-gate.html). Amazingly, fish will still swim through a three foot wide tide gate tube to get into a tidal marsh just to take advantage of the cover and food source. But, because there is limited exchange of water across the dyke, habitat quality is likely degraded and fish community diversity and distribution may be limited.

Natural resource agencies have recognized the value of tidal marshes to healthy fish populations, not to mention other wildlife, such as migratory birds. The Oregon Coast National Wildlife Refuge Complex has recognized the value of actions reconnecting historic tidal marshes by removing tide gates and dykes, filling in irrigation ditches, reconstructing historic channels, and restoring tidal exchange. The Columbia River Fisheries Program Office has been fortunate to be a part of these restoration activities at Nestucca Bay NWR and Bandon Marsh NWR. We have collected fish community diversity and distribution information prior to restoration activities and immediately subsequent to those activities in the case of Nestucca Bay NWR. This information will serve as baseline information for long term monitoring that will track the anticipated benefit to the fish communities using these areas, thus scientifically validating these types of restoration projects from a fish perspective. 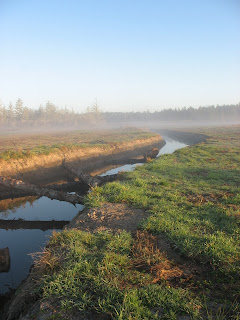 The restoration activities occurring at Bandon Marsh NWR are ongoing, with construction expected to be finished in summer 2011. If you would like to follow progress, you can do so at http://www.fws.gov/oregoncoast/bandonmarsh/restoration/index.cfm.
Posted by Michael Hudson at 4:09 PM No comments:

"The Pursuit of Excellence in Science Teaching"

This year, the annual Oregon Science Teacher Association conference was held at the high school in Colton, Oregon. The U.S. Fish and Wildlife Service hosted a booth at the event for the first time in an effort to promote the educational programs and materials available at our different refuges as well as from the CRFPO. 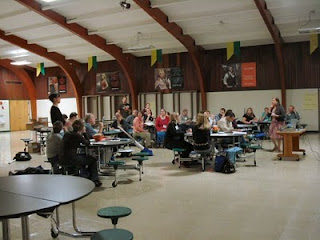 This event usually draws around 400 teachers from all over Oregon so we knew we would have a good chance of reaching many of them. Exhibitors such as us were told to expect at least 100 teachers at any time in the exhibition hall and even more during lunch. Well, that is exactly what happened.
Aside from showcasing our programs, loads of 'goodies' such as bookmarks, posters, pins, pencils, and pens were available for the teachers. And just to make it easier for the our visitors to remember us, a concise leaflet featuring these programs and other materials was given to each teacher for future reference and contact information. With such a captive audience of science teachers, this event proved to be a worthwhile experience in outreach and education. 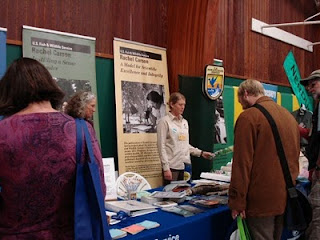