Another Potential Threat to Native Species?

Recently, I was reading an aquatic nuisance species newsletter. In it, there was a little snippet about a creature called a ‘tadpole shrimp’, Triops longicaudatus. This animal is apparently sold as a novelty pet, sort of like sea monkeys. They are crustaceans with 3 little eyes and can grow to 2 ½ inches in length. They are sometimes called the dinosaur shrimp, having changed little in the last 200 million years. 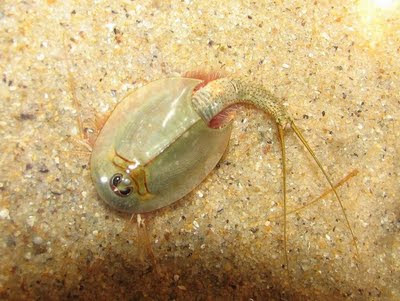 Triops are interesting creatures, indeed, and is a very successful animal. They have become adapted to living in vernal pools or temporary ponds. In the winter and spring, as these ponds fill with water, the Triops eggs hatch. Within a few weeks, they can reach 2 inches in length. Being omnivores, they eat almost anything from algae to shrimp and insects, sometimes even their own siblings. After maturing they lay eggs. Triops can live up to 90 days, but die once the water dries up in the pool. The eggs remain in the dirt of the dried up pond, until the next rain.

Triops eggs are extremely hardy. The eggs can withstand freezing temperatures as well as hot temperatures over 200 degrees F for over half a day. They can also remain in a dormant stage for up to 20 years. Because they are adapted to living in temporary pools, the eggs must completely dry out before they can hatch, therefore these animals cannot live in permanent water bodies.

Tadpole shrimp are gaining enormous popularity as pets with many websites dedicated solely to the care and raising of these animals. They are cute and novel but we all know what sometimes happens when people get tired of or outgrow their aquarium inhabitants. Do you remember all those rusty crayfish which were used for educational instruction? Once the studies were over, the instructors or students would release them into the nearest water body, not realizing the impact the non-native crayfish might have on the ecosystem. The result: the rusty crayfish not only displaces our one species of native crayfish but also dines on fish eggs. Will Triops become such a threat to animals native to our vernal pools?

What do you think of shipping these animals all over the world? What might their potential impact be on native species if they are released?
Posted by Columbia River Fisheries Program Office at 9:50 AM No comments:

The Columbia River Fisheries Program Office (CRFPO) recently held an open house, during which, a number of local high school students visited the office. Part of the open house featured a Fish Identification session. This was an opportunity for the students to learn about, see and experience some of what the biologists at CRFPO do every day in streams of the Pacific Northwest … identify what it is they are working with!

There are many types of fish in the world that have different appearances, different behaviors, and live in different habitats. So the initial discussion focused around what makes a fish a fish. While many people seem to think they know exactly what you are talking about when you say the word fish, sometimes it can be pretty challenging for them to give a simple definition of what a fish is. The students brainstormed a bit and came up with many of the important characteristics. In general, fishes have three important traits in common: 1) they live in water, 2) they have fins and 3) they use gills to get their oxygen from the water.

When it comes to identifying fish, it is also important to know that life is full of changes. Most fish go through a cycle where they start as an embryo (or fertilized egg), hatch into a larval form, develop into a juvenile form and finally mature into an adult form. Fish from the same species can look very different from each other depending on which of the forms you are trying to identify. For example, the picture below shows a larval (left) and adult (right) fish from the same species.

(not to exact scale, relative scale only)

One fish, two fish, red fish, blue fish (Dr. Suess).
The students then worked through the classification system that most biologists and scientists use, and that many of them had already learned in school! This system is a method by which biologists group and categorize organisms by biological type, arranging organisms into a hierarchical series of nested groups. The scientific approach is to take all things and group them (from largest group to smallest group) by: Domain, Kingdom, Phylum, Class, Order, Family, Genus and Species (which usually has a related common name). The following questions helped CRFPO biologists and the students determine if what they were looking at could be a fish. To possibly be a fish, they needed to answer “Yes” to the following: 1) Does it have cells with a nucleus? (Domain = Eucaryota), 2) Is it a multicellular, heterotroph? (Kingdom = Animalia), 3) Does it have a hollow, dorsal nerve chord? (Phylum = Chordata). Within this Phylum there are three Classes of fish. Chrondrichthyes are the cartilaginous fish for which there are over 900 species. Agnatha are the jawless fish for which there are over 100 species. Osteichthyes are the bony fish for which there are over 30,000 species. The goal of FWS 101 was to focus on five particular species and be able to identify two jawless fish as well as three bony fish. The jawless fish were both from the Order Petromyzontiformes and Family Petromyzontidae and their common names were Pacific lamprey & western brook lamprey. The bony fish were all from the Order Salmoniformes and Family Salmonidae and their common names were Chinook salmon, coho salmon and cutthroat trout.


Its All In The Sequence?
CRFPO biologists then went through a series of questions to help determine which of these five species a student might be looking at.

Question 1) “Is it jawless or jawed”? The pictures below show a jawless fish (left) and jawed fish (right).

To be a lamprey a fish would have to be jawless. In addition, lamprey have gill slits, no paired fins and a notochord.

Question 2) Is it a Pacific lamprey or western brook lamprey? 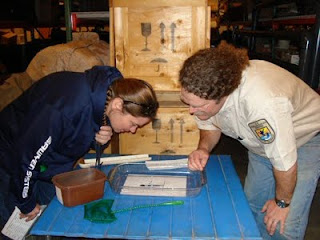 If it was jawless, what does the caudal area look like? Two common species of lamprey in the Pacific Northwest are Pacific lamprey and western brook lamprey. The larval forms of these species can be difficult to identify (see the picture below). Larval Pacific lamprey (left) have a relatively light caudal ridge with a dark, uniformly pigmented caudal fin. Larval western brook lamprey (right) have a relatively dark caudal ridge with a clear, or speckled caudal fin.

Question 3) Is it a trout or a salmon? 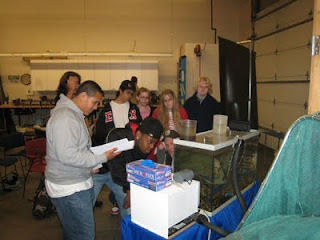 Question 4) Is it a cutthroat trout?

A trout is generally a cutthroat when it has red/pink marks (slashes) in the throat area, speckles on its body and dorsal fin, and teeth on its tongue.

Question 5) Is it a Chinook or a coho salmon? 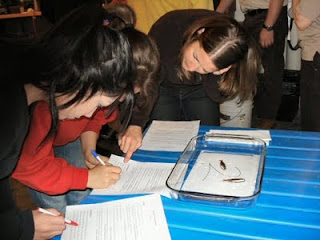 Every day, from here to there, funny things are everywhere (Dr. Suess).By the end of the day the students had done a tremendous job absorbing all of this information. They skillfully used the key below and had become experts identifying these five species of fish. And you never know when they might find one of these fish in their neighborhood stream!