In the Pacific northwest of the , the management of natural ecosystems has become focused on the conservation of threatened and endangered species.  When it comes to fish populations that use fresh water, conservation efforts have often centered on remote wilderness areas that are relatively pristine, or in what have been called stronghold areas.  However, the conservation value of “peripheral” populations has also been recognized.  Peripheral populations are often small in size, and are generally defined as those on the edge of the species’ range.  It is not uncommon for some imperiled fish populations, especially peripheral populations, to inhabit urban, suburban or developed landscapes.  The typical threats urbanization generally presents to aquatic species include poor water quality, flashy (highly variable flow) streams, and barriers to migration.  In addition, urban areas may have distinct climates, often being warmer than their surrounding environments.  Whether climate change will impact urban areas differently than rural or remote areas is unclear.  The ecology of species in urban environments, or “urban ecology” is emerging as an important consideration for conservation.  Fish populations in urban or suburban areas are becoming increasingly valued as a component of overall conservation efforts. 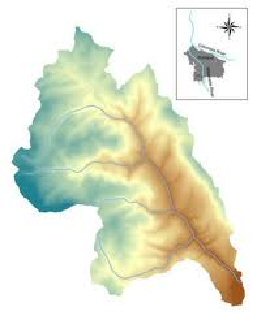 Tryon Creek is one of the largest, and most protected, urban watersheds in .  Tryon Creek is an urban stream located in southwest .  The creek flows approximately 3 miles through privately owned land before entering Tryon Creek State Natural Area, a 640 acre area of public land, through which the stream flows another 3 miles.  The lower most portion of Tryon Creek flows through public land owned by the City of and the City of .  The lower ¼ mile of the creek is separated from the upper portion by a culvert that runs under Highway 43 and a railroad.  Almost 25% of the land drained by Tryon Creek is parks and open spaces or publically managed.  Thus, as an urban stream, Tryon Creek has relatively high restoration potential.

Tryon Creek is, or likely has been, home to a number of native fish species.  Species that currently can be found and appear to spawn in Tryon Creek include rainbow and coastal cutthroat trout.  There is evidence that steelhead trout and coho salmon historically spawned in the creek, too.  We have also found juvenile coho and Chinook salmon in the stream, above and below the Highway 43 culvert.  Historically, it is thought that Pacific and western brook lamprey may have also used the creek.  Currently, although lamprey are occasionally found below the culvert, they do not appear to be in the creek upstream of Highway 43.  In addition, coho and Chinook salmon as well as Pacific lamprey can also be found in numerous streams adjacent to Tryon Creek (such as Johnson Creek).

What Might Be Problems For Fish In Tryon Creek?

Some people think that fish entering the creek is a problem.  About ¼ of a mile up the creek there is a culvert.  This culvert (under highway 43 and the adjacent railroad) may be restricting, or preventing, upstream passage of fish and keeping them from being able to access 90-95% of the habitat in the watershed.

Some people think the conditions in the creek are a problem.  A number of culverts (like the one under Boone’s ) may also be barriers to fish movement within the watershed.  Additionally, in some cases there isn’t much wood in the stream (fish often like wood for cover) and a lot of the stream bed is made up of fine, sandy sediment (which fish may not like very much).

Some people think the habitat conditions surrounding Tryon Creek are a problem.  About ¼ of the watershed is “impervious” or cannot soak up rain.  For example, a paved road is generally impervious and rain runs off the road rather than soaking into the ground.  In the case of Tryon Creek, much of the rain that would normally soak into the ground and slowly make its way to the creek, instead, rushes quickly and directly to the creek.  This results in very sudden and frequent changes in the amount of water in the stream, how fast it is flowing and how dirty it is.

However … although many of these conditions may be problematic to fish, cutthroat trout can be found throughout the watershed, and appear to be relatively healthy and abundant.  So Tryon Creek clearly appears to be an urban watershed that has potential for fish!

What Is Being Done To Help The Fish?

A collaborative project to improve habitat conditions downstream of Highway 43.  In particular, this project was designed to improve aquatic habitat for fish, including fish from outside of the subbasin that may use lower Tryon Creek for rearing.

A collaborative project to improve passage conditions for migratory fish that want to move upstream in Tryon Creek (for example, into the State Natural Area).  The first part of the project created a condition where fish could swim into the culvert (rather than have to jump into it).  The second part of the project replaced some old baffles in the culvert to try and help fish be able to swim through the culvert. 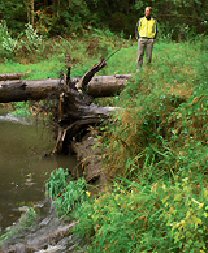 Some of the sediment and water quality problems observed in Tryon Creek are the result of runoff from tributaries.  This runoff picks up a large amount of sediment and moves that sediment into the creek.  A large amount of sediment in the water is likely bad for fish.  Thus, a project was implemented to construct brush-check dams in tributaries to Tryon Creek.  These dams made of natural brush are designed to help filter sediment out of the tributaries while still allowing for water and fish to pass.

Collaborative projects have been implemented throughout the watershed to address water flow, water quality, and aquatic and terrestrial habitat.  Bridges have been built to replace tributary culverts.

If and how the urban restoration actions are benefiting fish and helping conservation IS the big question.  And a number of folks are interested in the answers.  A large number of community members are interested and the Friends of Tryon Creek have developed a citizen-based monitoring plan to help figure it out.  Various government agencies (such as the USFWS, ODFW, State Parks) and non governmental organizations (such as the Friends of Tryon Creek and Tryon Creel Watershed Council) are conducting monitoring to help figure it out.  Tryon Creek recently had a visit from Senior District Judge James Redden and District Judge Michael Simon who were also interested in seeing what was being done and what might be working.  Right now, it is probably too early to tell.  However, you can come and visit Tryon Creek, check out fact sheets and other information on the creek, volunteer to help monitor, see what’s going on and then  … YOU, too, can be the judge!

They secretly slither, swim, hitchhike and crawl their way, often traveling thousands of miles over land and sea to invade our local rivers, lakes and streams.  Once they make themselves at home, these pesky invaders wreak havoc on the aquatic ecosystem and local economy.  Yes folks, we are talking about Aquatic Nuisance Species.  In the next few months we will introduce you to 10 tenacious trespassers that pose a threat to the native flora, fauna, and fishes of the Columbia River Basin.  Keep a close eye out for these critters because we need to send them packing for good!
Posted by Columbia River Fisheries Program Office at 1:40 PM No comments: