There’s no doubt that fishing and camping as a child had an influence in my career choice and implemented a lifelong conservation ethic in me.  In particular, my dad and my oldest sister’s-husband fished with me from a very young age and through my teenage years and family camping excursions occurred often.  Some of my best memories growing up are fishing trips with my Dad in western South Dakota.


Now that I have a family, spending time outside, camping and especially fishing are activities we want our girls to experience while they’re growing up.  They’re at ages where their curiosity is sky-high and it’s just a matter of getting them out to experience nature and explore.


They both have been fishing before but this year we bought both of them fishing poles in the winter and told them they should get used to using them for the summer during our camping and fishing trips.  After the girls endured an excruciating 5-second introduction of casting by me, the poles were immediately snatched from my hand for their own attempts with a sponge fish or a bobber on the end of the line so nobody gets hurt.  Frustration ensued but after a short period of coaching and correction they both figured it out.  Periodically over the next few months, I would see one or both of the girls with their poles outside casting toward the tree in our front yard, or even the neighborhood kids having a turn at casting.  A few times we had to establish that casting was not something that needed to occur in the living room near breakable items but could happen in the driveway or yard anytime they wanted to practice.


I was cleaning out our garage this spring and had our camping gear strewn about but was able to capture some of their spontaneity with the poles and excitement for our two big summer camping/fishing trips.  Notice the excellent technique! 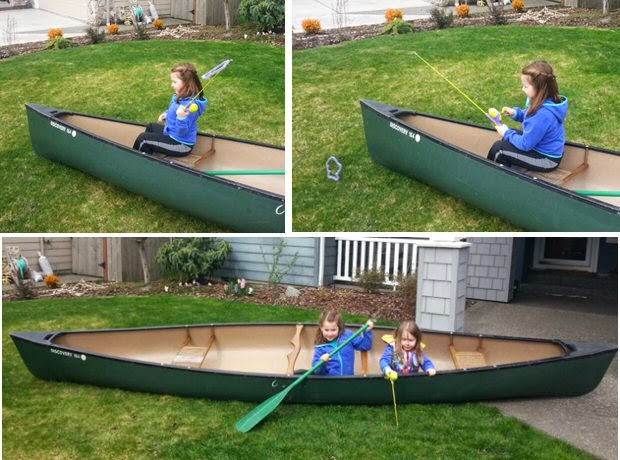 Our first trip this summer fishing and camping was a big success!  First I should define success ….. getting the girls out in nature and getting a pole in their hands.  We didn’t catch fish on the trip but here’s some of what we did and talked about:

·        Will we eat what we catch?  This was discussed on the way to the lake with our poles and was a fairly in-depth and long discussion almost exclusively between the girls but they decided that they should if it was big and would not if it was a “kid” fish.  Our youngest had pointed out to me that in the movie Brave that Merida and her mom, Elinor, caught and ate fish together when Elinor was turned into a bear.  I said that our fishing would be similar but different.

·        Salmon eggs vs. worms vs. lures.  What are lures and how do they look attactive to eat? Our oldest compared lures to earrings like Grandma wears but not the same thing.. a good observation, I thought.

·        Osprey  and what they are doing flying above the lake (we also saw them dive on fish and carry their meals back to eat).  Very exciting!  The girls deducted fish were present in the lake and the potential to catch something was palpable with the osprey successfully “fishing”.

·        What are those things swimming by the shore? (Newts) Are those fish? (Amphibians) So they are frogs? (Similar). Why aren’t they fish? (scales vs. skin and terrestrial and/or aquatic lifestyle). Will we catch them?  (maybe).  We followed them along the shoreline watching them swim, pop their heads up and search for food.  What do they eat? (good question).  What’s that? (A crayfish)  Is it alive? (after a stick invesitgation by the girls it was determined dead).  Can we touch it? (Sure).  Are there more? (Likely).  Will we catch them? (Maybe).  I said bigger fish likely eat them in the lake which got our older daughter staring into the distance to paint that mental image, which appeared enthralling by her expression.
Anyway, a small snippet of our excursions and all told and we probably fished for a total of 3 hours over our entire camping trip before rainy weather, cold or wind played a role for deciding to move on.  Not as much time fishing as we had hoped but still a huge success and a lot of fun for them. 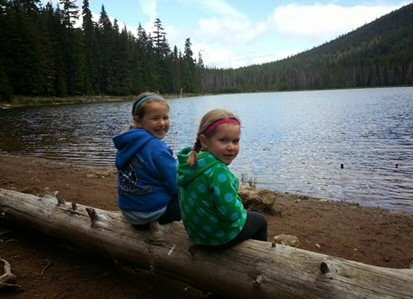 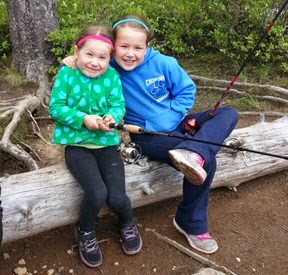 ﻿
If you’re thinking about how to get a kid out fishing or into nature this year there’s always opportunity to be had.  The Service has a great introductory website to just getting kids out in nature here.  Also coming up September 6th from 8:00 am - 1:00 pm is Kid's Fishing Day at Carson NFH (information will be posted  here).  This event is great in that all the poles and gear are provided for the kids, Service staff will help them fish, they are nearly guaranteed to catch something in minutes, the catch is cleaned and bagged, and you might even get a momento like this. 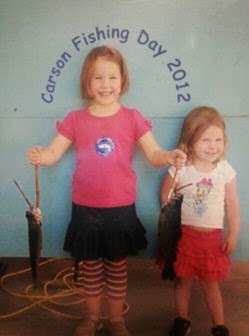 We plan on meeting some of my family in Glacier National Park later this summer for a week of camping, hiking, fishing and just exploring nature.  I know the girls are going to have a great time and we can make some memories.
Submitted by Rod Engle


﻿
Posted by Columbia River Fisheries Program Office at 7:06 AM