Letting the Rivers Teach: Of Memories and Science 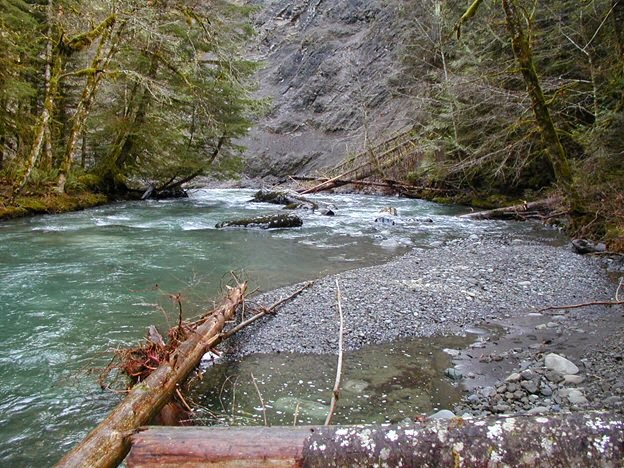 By Paul Bakke, Geomorphologist, Washington Fish and Wildlife Office
All science begins with observation.  Although that statement may seem too obvious to mention, its truth becomes more difficult to hold when we are dealing with rivers, which can look so different from winter to summer, and which can seem to present the same features for years, only to change radically overnight.  After all, the rivers have been here much longer than each of us, so it becomes a challenge to recount their story accurately.  What we see today is merely a snapshot in time.  Change that occurs slowly tends to be imperceptible to us.  And from the long-term perspective, what we remember a river to be like over our short lifetime may not, in fact, be the normal or stable form.
The mark of a good scientist, like Luna Leopold, whom I introduced in a previous post (http://wordfromwild.blogspot.com/2013/08/letting-rivers-teach-leopold-revisited_12.html) is to be able to synthesize a great many observations into a coherent story relating what we see at one point in time, that is, the form of the river, with universal natural processes, which not only act upon this river, but on all rivers, throughout time.  To reiterate, the “form” of a river, that is, its shape, is like a snapshot.    Processes, such as erosion and deposition of sediment, are the forces that act to produce and change that form.   Processes, you will recall, are more like a video than a snapshot.  And to study these forces of change, we need to be patient, carefully documenting the way things change over rather long periods of time, and observing many different rivers to look for patterns.
Seeking rivers that still had their natural processes of erosion and deposition mostly intact, Luna Leopold and other scientists made careful observations and measurements of channel form, and then put these observations together to create mathematical models like those in the graph, below, that allow us to predict the stable form of a river channel.  For example, in Western Washington, a river with a watershed area of 100 square miles would be expected, on average, to have a “bankfull” width of 93 feet and depth of 4.4 feet, for a water discharge of 2350 cubic feet per second.  “Bankfull” refers to the condition when the channel is full to the top of its bank and just ready to spill over onto its natural floodplain.  Because the floodplain is such a consistent feature of alluvial rivers, the bankfull channel dimensions work well (at least, much of the time) as an index to compare one river with another, and to judge whether a river is in a stable condition or not.


In natural settings, the channel slope, curvature, width, depth and sizes of rocks making up the streambed adjust together into a configuration that allows an approximate balance between erosion and deposition.  When such a balance exists, the river can persist in roughly the same shape or form for long periods of time.  The channel is stable.  Note that “stable” does not mean “static.” Streambanks will erode, but that erosion will be approximately balanced by sediment deposition.  So “stable” means that the shape, in terms of average width, depth, slope and curvature, persists over time, even though the river may relocate its channel as it continually transports and rearranges the sediment that comprises its banks and bed.  If the form of the river is changed, this balance will be upset.

The position of “bankfull” can serve as a clue for identifying imbalance.  Excessive erosion causes the streambed to drop in elevation, making it impossible for the moderate floods to reach the floodplain.  In other words, the “top of the streambank” no longer functions to disperse floodwaters and reduce erosive forces.  Alternatively, excessive deposition reduces the capacity of the channel to contain its flow, causing the channel to widen by eroding its banks.  The river no longer is bounded by the “top of bank,” and will flow across the floodplain more often, eroding new channels and depositing sediment in new places.  In both of these examples, the “bankful” channel dimensions have been disrupted.  And there are other ways of disrupting the form of a river, such by dredging it for depth or for gravel mining, or by artificially straightening or confining  it, as in the photo below.


Why do we care about this?  A river in balance is self-sustaining, meaning its form and thus its habitat features will remain consistent over time.  A river locked into a form that doesn’t allow a balance of processes will always be at risk of breaking out of its confines, of tearing itself apart.  This instability puts habitat and infrastructure and investment in restoration at risk.
A river that was modified years ago may fool us into thinking that it is stable.  But the processes of erosion and deposition are relentless.  Eventually, something breaks.  When this happens, it starts the slow process of change back to a form that balances the processes of erosion and deposition.   That form, ultimately, may be quite different from what we remember.   Meanwhile, we have a choice.  Do we let nature take its course, allowing the river time and elbow room to regain a stable form?  Do we put it back into its former modified state, knowing full well that we will be doing that again and again? Or do we intervene by constructing a stable form, speeding up the recovery and giving the river some room for future adjustments?
Scientists have the difficult task of figuring out what the consequences of these choices will be.  For this, it is essential that they collect measurements on rivers that still have their processes intact.  These rivers can serve as models for a resilient, self-sustaining channel form.     A resilient form is capable of surviving disturbances, such as large floods, with few long-term effects.  Recovery tends to be more rapid, and in the direction of known, stable channel forms.  More about what those forms are in a future blog entry!
﻿
﻿
Posted by Columbia River Fisheries Program Office at 9:15 AM